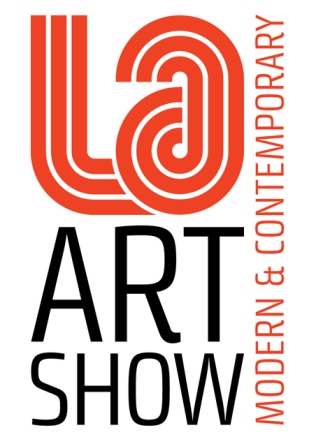 The Los Angeles Art Show is one of many events scheduled during LA’s Arts Month. This January, visitors and natives alike partake in the city’s many cultural offerings from Photo LA, the LA Phil, the Affordable Art Fair, Pacific Standard Time and the much-anticipated Los Angeles Art Show.  Perhaps it is the heady variety of cultural offerings competing for patrons, but sadly this year’s show was sparsely attended.  While this fact was slightly disappointing to some of the Gallery owners in attendance, it meant that if you were lucky to go to the show not only did you have direct access to some great galleries spanning the globe, you were more likely to strike a deal or two on some pieces.

I sat in on a very interesting panel discussion about the Los Angeles Art Market and collecting, and I was very interested in Dean Valentine’s take on collecting.  Valentine has been an avid collector since 1996 and focuses his acquisitions on young emerging talent vs. established blue chip artists.  While he certainly has the resources for both types he focuses on works that connect to him emotionally vs trying to build an investment portfolio out of his collection.  Valentine is also a member of the Board of Overseers at the Hammer Museum and has recently acquired space at the Pacific Design Center to highlight select works from his collection (which I am looking forward to see very soon).

I decided that if I had the opportunity to curate a small museum or gallery, I would have gone for the following pieces I spotted yesterday at the LA Art Show.  Here’s a virtual tour of my “little” dream museum. It would have 3 galleries:  “La Rue” (for Street and Neo Pop), Four Corners (Global Contemporary), and Industrial (for artists that choose to produce their art using apprentices-this will be a subject of a much longer post in the future). Ok here we go:

I was immediately drawn to this piece at the show.  I love fusions of street art and pop culture references.  Speedy’s work is filled with this amalgam of styles.

Cameron Gray is a Los Angeles artist whose background is in computer graphics.  Digital representations of his work do not do them justice as each piece is composed using a collage of individually painted square blocks.  In this series of work, Gray recreates classics (as in the Van Gogh portrait above) using this technique.  His technology background is useful in this medium, as each piece is mapped out on computer before it is finally composed.

I had the great pleasure of meeting Artist Francisco Bugallo who I raved about last year.  He recently created some stunning resin w0rks that appear to be floating in the frame.  The grouping was a study on Michelangelo and I adored the work shown by Galeria Moro from Venezuela.  They were one of my favorite galleries (my camera fails to capture the essence of his work).

The artists I would showcase in the “Industrial” wing of my virtual museum would be those artists who are/were known for utilizing assistants to create their work.  This is a subject of great debate as recent stories have been published about David Hockney’s very public criticism of Hirst’s practice.  Love them or hate them they have all reaped critical and financial acclaim as shrewd businessmen and artists.  This camp includes Warhol, Hirst, Koons, Shepard Fairey and Takashi Murakami to name a few. It’s a dynamic that fascinates me, so I naturally was drawn to these works:

Seen individually, the foil-block butterfly prints stand on their own, but the way Paul Stolper grouped them in his stark white, brightly lit space on the show’s floor was absolutely stunning. The space looked like a semiconductor cleanroom, it was impeccable.

Last but not least, I spent a great deal of time in the Denis Bloch space.  They had an incredibly diverse representation of work but on this one small unassuming wall contained the trifecta of Contemporary powerhouses.  I simply wanted to just cut this wall and transport it to my home.  Hirst’s diamond dust skull is so oddly captivating.  The Warhol was a copy of one of his early shows at the Leo Castelli Gallery in NY.  Lastly Koons’ Balloon Dog is a recreation of the larger scale piece that is at the Museum of Contemporary Art.

That’s it for my virtual tour and recap of the show.

I met some amazing artists, gallerists and art enthusiasts over the last 3 days.  I learned a lot and had a ball!  Of course, now I’m thinking about how I can get to NY’s Armory Show in March… 🙂