Last year I wrote a post singing the praises of museum stores being my “Happy Place”.  Well, a close second to museum stores is Target.  I don’t know what it is about the place, but there’s something gratifying about going to Target after work to stock up on t-shirts, greeting cards, makeup bags, natural hair products and cheap earrings.  Best part is I can usually get outta there having spent less than $50.00. 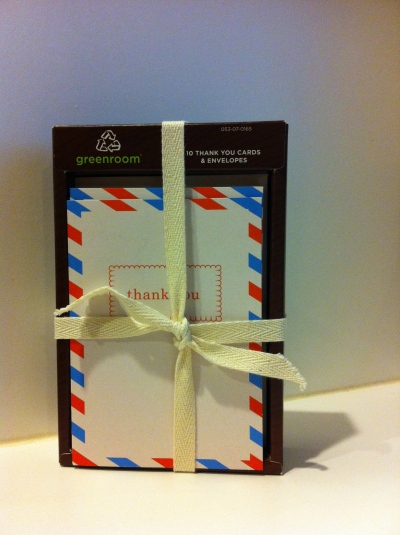 So after  a particularly hellish day I went to Target and snapped up some cute “Thank You” notes (I collect stationery).  Hmm, can writing imaginary Thank You notes to the annoying people who guest-starred in my day serve as an emotional catharsis?

~~”Hey dude, thank you for cutting me off in your U-Haul trailer at 80 MPH only to slam your brakes and cruise down to 50 MPH…  Really appreciate it, champ.  I didn’t even think it was possible for a U-Haul to hit speeds over 50; turns out I learned something new today.  Thanks!”

~~”Thanks gum-popping Lady who let the Elevator doors slam shut in my face as I was running late this morning.  How did you know I like to wear my cafe lattes on my white jacket?  So thoughtful!”

~~”Dear Co-Worker who has made it their life’s mission to bait me into political debates in the office.  Thanks for going out of your way to make my day “awkward”.  Please share more about your disdain for entitlements…Smooches!”

On second thought, why would I waste such cute stationery?

Anyway, the REAL reason for my Target trip today was Andy Warhol.  I had heard that Target had released a series of Limited Edition designed Campbell’s Soup cans featuring Warhol’s iconic screen print, each sold for $.75.  The designs were released to commemorate the 50th anniversary of Warhol’s soup can paintings, which were also exhibited at L.A.’s Ferus Gallery that year.

I strolled into my local suburban Target expecting that they wouldn’t carry them; much to my dismay, it turns out they SOLD OUT completely  Sunday morning!  I was momentarily gobsmacked, but I live near Cal Arts, so I guess I should have expected it.  I hate missing out on good Art Hype at bargain prices…

*slowly breaks out Thank You note and pen*

“”Dear Tomato Soup Can Hoarder:  Thanks for NOT leaving some Warhol for the rest of us art starved suburbanites…’mmm…mmm (not) Good'”.

Alas, I guess I can settle for my cool DIY Andy Warhol Screen Print iPad App created by the Warhol Museum.  This is AWESOME by the way.  I may Tweet my masterpiece tomorrow…

5 thoughts on “Target, Soup and Another “Happy Place””