You know, some people may say it is unreasonable to charge a fee to attend an early preview of a museum that still doesn’t have operable indoor plumbing (especially when said museum will be free to the public when it opens in the fall), but Eli Broad prefers paths that lead to unconventional thinking.

(That’s why this George Bernard Shaw quote is one of his favorites.)

On February 15th, 3,500 lucky people seized the opportunity to get a glimpse inside Grand Avenue’s latest architectural showpiece (tickets for the preview sold out in 30 minutes).  After experiencing the space I am looking forward to seeing the Broad’s complete vision come to fruition in the fall.  Here’s what I love about the space in its current state after attending the preview last Sunday:

1.  The Veil (“The Honeycomb”, “The Asian Pear”, “The Cheese Grater”): The natural light that floods the 3rd floor gallery from the hundreds of skylights that span the acre of column free space was stunning and to see the expanse of the space really gives the Broad a tremendous amount of flexibility for curating The Broad’s collection in the future.

2.  The Glass Elevator (“The Shaft”):  If you’ve been up the BCAM elevator at LACMA then you know that Eli Broad has a preference for grand entrances.  The Broad features a tubular glass elevator and a cavernous escalator that takes visitors from the 1st to the 3rd floor.

3.  The Oculus (“The Glory Hole”). While the Honeycomb veil is a distinctive architectural feature, the fluidity of the veil forming the eye on the southern wall is an unexpected focal point.  While attempting to get a picture of this, a lamp-post was blocking the shot.  As two gentlemen were admiring the view across Grand Avenue I proclaimed “they gotta get rid of that lamp-post.”  At that point one of the men said, “yes we need to work on that”.  And in a classic case of hindsight, I now realize that I may have inadvertently offended Charles Renfro, one of the named architects at Diller Scoffido + Renfro,  the firm responsible for the building’s design.  Just add that to the long list of awkward art moments I’ve amassed over the years, but that’s a post for another day…

Perhaps the most unconventional aspect of the space was how the museum chose to highlight it.  While the Glass Elevator and escalators were not operable, visitors rode an enormous freight elevator that opens up to a panoramic view of the 3rd floor gallery.  The temporary exhibit “Sky-Lit”, Volume, Light and Sound offered two different mediums for the public to physically transform the space into a dynamic organism.  Speakers flanked the southern end of the gallery space where various recorded sounds played softly in the background both competing and harmonizing with the hollow sounds of the  gallery and the enthusiastic chatter among visitors meandering around the expansive space. 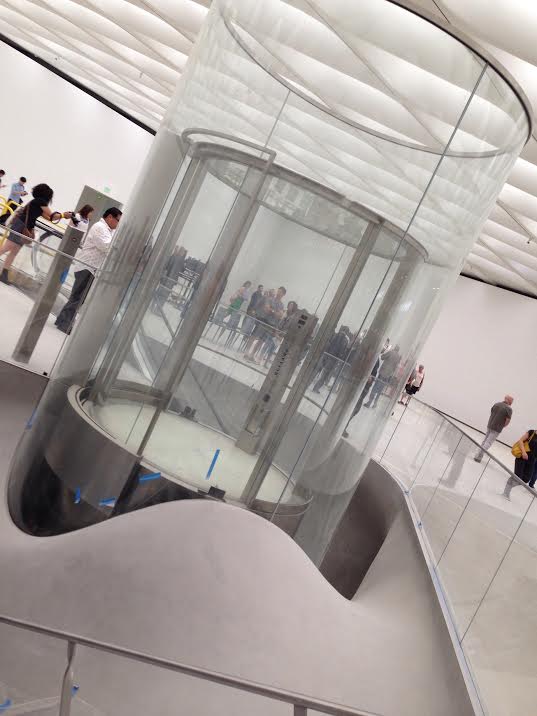 2 thoughts on “The Broad: 3 Things I Love About LA.’s Newest Museum”