I mentioned in my first Artist a Day Challenge post how instrumental the Hammer’s digital catalog for Now Dig This! was in documenting many of the incredible artists that came out of the black arts movement between the 1960s’-1970’s. The curator for the show, Dr. Kellie Jones and her team uncovered some interesting themes, one of which was the unique friendships, partnerships and coalitions that were developed in the 1950’s and 1960’s: one collective contained a curious surprise.

At the end of 2016, I heard about the passing of the 106 year old Chinese artist Tyrus Wong whose artistic expertise in lush landscapes became the animated inspiration for the classic Disney film Bambi in 1942.  Wong’s life story is one filled with soul crushing obstacles including his long journey to the U.S. which  began when he was separated from his mother and ended when he was detained alone on Angel Island in San Francisco for a month. Living in poverty in Los Angeles, he ultimately overcame these hardships with his art, where he had a long career as an illustrator and designer. His work on Bambi was virtually erased from history and subsequently remained hidden for decades. 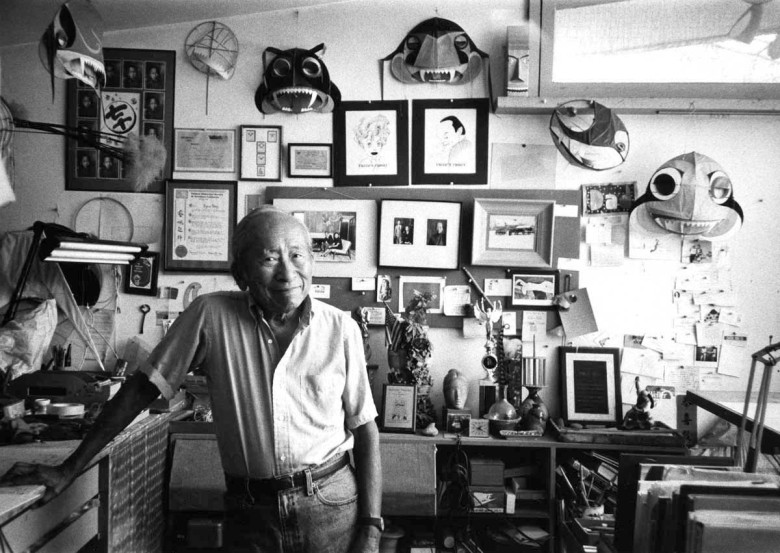 Wong worked as an entry level animator at Disney for years with little recognition, however in Bambi Wong saw an unique opportunity to showcase his talent for landscape illustration. Even though Walt Disney never met Tyrus Wong in person he fell in love with his work and he incorporated his style into the film, with Wong playing the role of an artistic consultant to the artists and illustrators behind Bambi. Despite the studio’s heavy reliance on Wong’s artistic vision, the prominent role he played in all areas of the animated film was downplayed after he was unceremoniously laid off from Disney before the film was released.  His connection to the film was distilled to a simple landscape artist credit, but his true role remained obscured for years.  While his tenure at Disney was a small part of his successful career in illustration (Wong worked for other studios and as a greeting card artist before retiring in 1968), there have been numerous efforts to reclaim and commemorate his pioneering work. One small part of his past remains a small footnote that came to me as a surprise when I saw Tyrus Wong mentioned in Dr. Kellie Jones’ catalogue for her groundbreaking show about Black Artists in Los Angeles.

In the 1950’s a group of 11 artists came together in Los Angeles to form a co-op to support and promote each other’s works.  The black owned gallery on South Hill Street was called Eleven Associated and the founding members included Curtis Tann, William Pajoud, Beulah Woodard, Alice Tayford Gafford and the group’s one asian member– Tyrus Wong.

Wong’s work was also included in the extensive collection of black art owned by Golden State Mutual Life Insurance Company.  Beyond this, the information on the short lived gallery is scant (according to the Hammer Museum’s catalog for Now Dig This!, the gallery remained in existence for only one year).  The Hammer staff made numerous references to Tyrus Wong and William Pajaud in the show’s catalog, noting that Pajaud may have studied with Wong. They also uncovered striking similarities between their landscape work and artistic styles.  Interestingly the two artist’s backgrounds ran on parallel tracks.  They both experienced racial violence at a young age, they both turned to sign design in their early artistic careers and they were both discriminated against at Disney -Pajaud could barely get his foot in the studio to interview (he was turned away once they found out he was black), while Wong’s work  was exploited as an employee there.  They also faced the discriminatory housing practices that were a byproduct of the restrictive covenants between the 1920’s and 1940’s that precluded many African Americans and Asians from home ownership throughout Los Angeles.

This is why the bonds created by groups like Eleven Associated were critically important for artists to not only promote each other’s work, but to support one another.  Galleries like Brockman and Gallery 32 in addition to groups like Art West and the Black Arts Council all fostered creative networks that were essential for survival in the art world to counteract the practices that enabled the exclusion within it.

Many of the artists in Eleven Associated are researched, celebrated and canonized today, but this particular gallery’s history continues to fade with time.  The work that these artists created during this period suggest an ever important social bond that I hope to see uncovered in the future.