They call it “due process” and some people are overdue
We beg your pardon, America
Somebody said, “Brotherman gonna break a window, gonna steal a hubcap, gonna smoke a joint, a brotherman gonna go to jail”
The man who tried to steal America is not in jail
“Get caught with a nickel bag, brotherman. Get caught with a nickel bag,” sisterlady on your way to get your hair fixed
“You’ll do Big Ben, and Big Ben is time”
But a man who tried to fix America will not do time

On Friday evening I was at home trying to make sense of the barrage of events that unfolded throughout the week. In another place and time, any one of these headlines could become the defining story of a year, or a decade, but instead they have come together in a 7-day perfect storm of chaos. And here goes Gil Scott Heron with the poetry in 1975 that captures the realities of 2020.

As Memorial Day weekend kicked off last Friday, a photo by Margaret Bourke-White from 1937 became a perfect visual metaphor for the social and economic disparities that have intensified in the wake of Covid-19. This depression-era photograph features a group of African-Americans in a breadline, standing below a billboard of a nuclear family heading off on an idyllic adventure in their automobile. The macabre imagery formed in the juxtaposition between the blissfully unaware family that’s seemingly on the verge of driving through the families lined up below is matched in by the cruel textual irony contained in the billboard’s slogan: “There’s No Way Like the American Way”.

While the events of the Memorial Day week unfolded through the images I consumed, I found myself repeating that slogan: “There’s No Way Like the American Way.” because, advertising works, doesn’t it? 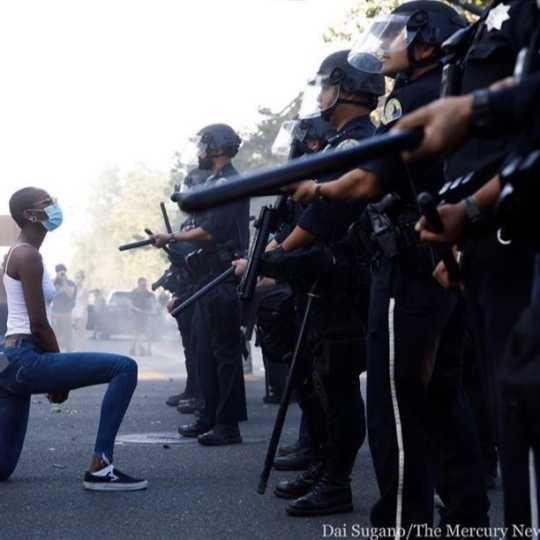 And America was “shocked”
America leads the world in shocks
Unfortunately, America does not lead the world in deciphering the cause of shock

I am saddened, but I am not shocked, and yet I wonder why there are so many of us who continue to be “shocked” by these events. The entire world is watching us– “The World’s Highest Standard of Living” isn’t just a billboard slogan, it’s a facade. So now what do we do with this? Where does the work begin? It’s past time that we figure it out.

Upon recounting the Watts Riots of 1965, artist Kerry James Marshall once recalled a memory that he was unable to place on canvas. In the aftermath of the uprising, the dark skies above Watts were thick with smoke, yet visible through smoldering debris, the large round head of a Jack in the Box sign continued to slowly rotate in the glow from the fire’s embers. There’s such a cruel joke in the visual image of a court jester’s head, an insidious symbol of capitalism as the survivor of state sanctioned violence. That image now rests alongside Margaret Bourke-White’s photo in my mind. The world is watching us, and waiting,

We understand and we beg your pardon

We beg your pardon, America, because we have an understanding of karma
What goes around comes around

And we beg your pardon for all of the lives and all of the people who’ve been ruined and who look forward to next year because they cannot stand to look at this one,

We beg your pardon, America, because the pardon you gave this time was not yours to give.