Over 6 miles of downtown streets were closed to traffic in the heart of Los Angeles for CicLAvia.  Yesterday officially marked the 5 year anniversary of the event that celebrates physical activity, community engagement and alternative modes of transportation.

During CicLAvia all non motorized modes of transportation are free to take over the blocked off streets of Los Angeles for a day of exercise, food and fun.  Along yesterday’s designated route in the “Heart of LA” event organizers set up hubs in Chinatown, Grand Park, 7th & Figueroa, MacArthur Park, the Arts District and Highland Park.  During the day riders enjoyed Food Trucks, attractions, photo booths, DJs, dancing and cheers of encouragement from the volunteers.  This was my first CicLAvia but I seen and heard about the event for years.  I normally stick to bike trails when I ride and have always had a slight fear of city cycling (mainly because I simply don’t trust other drivers) so I could not pass up an opportunity to cycle through some of my favorite neighborhoods in Los Angeles.  Plus I liked the idea of giving a figurative middle finger to the ever-present car culture that dominates Los Angeles.

From the minute we started our CicLAvia journey we were encouraged to explore new neighborhoods.  After tuning up our bikes the day before we got a flat on the way to the event, so we made a detour to Ryky’s Bike Shop in East LA to get it fixed. The shop was about 2 miles from the route and the place was buzzing with excited cyclists making their last-minute adjustments before the ride.  After that slight detour we were ready to go.

We jumped into CicLAvia at the Chinatown hub and rode into Grand Park, then continued to MacArthur Park to see the beautiful spheres in the lake as part of the “Portraits of Hope” installation.  After that we rode back through downtown to the Arts District.  After crossing the 4th street bridge into Boyle Heights we rewarded ourselves with tacos and dance music in Hollenbeck Park (climbing the 4th street bridge to head back to Chinatown after tacos with a single speed bike was not the smartest thing I did all day, but I survived). 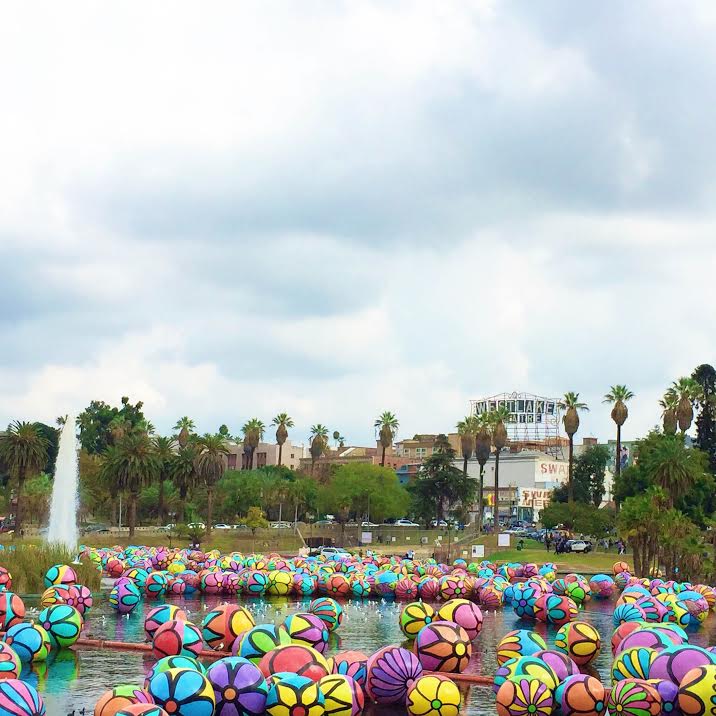 Along the route there was virtually every form of non-motorized transportation on the streets from fixies and tandems to penny farthing bikes (I call them Famolare Bikes), wheelchairs, strollers, roller skaters, low rider bikes, land paddlers on long boards, joggers, walkers, unicycles and some stuff that defy explanation. Some people were decked out in traditional cycling gear while others decided to celebrate Halloween early.  The one thing that everyone wore Sunday was a smile on their face.  That’s what makes CicLAvia such an enchanting experience.  It truly brings out the best of people to experience the best of Los Angeles.  I can’t wait to do this again.